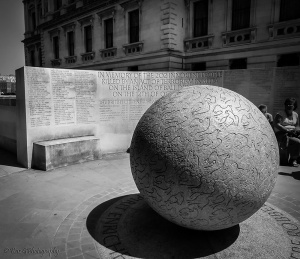 As incribed at the monument:

” they were robbed of life, but their spirit enriches ours.”

This lovely monument near St James Park was built in 2006 in memoriam to remember the people that were killed in the Bali bombings on October 12th 2002.

The monument  was designed by artist Garry Breeze and created by sculptor Martin Cook and his son Matt.  It has two main pieces: a large Balinese-style carving and a 1.5 metre marble sphere that symbolises the victims’ provenance from 21 countries. The carving’s 202 doves honor each person who died, and all victims’ names are painstakingly inscribed on a curved stone wall behind the globe.

Its not something I normally do but I found this photo amongst my holiday snaps from last year and thought it might look nice in black and white.  At this time I realised it isn’t long before the next anniversary so thought it would be  fitting to post it on the 12th.  This is my way of remembering those that have been lost.

Today whilst out driving I was behind a car that had a bumper sticker which I thought poignant and something that I felt was apt for this post:

“When the power of LOVE

overcomes the Love of Power

OUR WORLD will know peace”

This time twelve years ago we were still reeling from the New York attacks one year before and to have this happen was just so unimaginable in such a peaceful place as Bali.  I, like everyone else, knew exactly what I was doing that day we heard.  I remember talking to my mother about it and discussing the craziness of the world.  She voiced her concern as we were going to Bali after Christmas that year and was quite worried about my safety.  I had said don’t worry the worst has happened.  We were regular visitors to Bali and wanted to go more then, than at any other time, to show our support for the lovely Balinese people and to show we would not be scared!

How quickly the time  has passed but I am sure to those most affected, it is still very palpable.

For more  monochrome madness entries please visit the link on Wednesday.  The MM challenge is run by Leanne Cole and Laura Macky .