On our trip to Tasmania we started in Hobart and the next stop was the Tasman Peninsula.   It can be a day trip from Hobart.

Whilst waiting for a clearer day to head to Port Arthur historic site we did do a bit of travelling around the area to discover sometimes surprising scenery and interesting structures.

Down the road just past Port Arthur – Safety Cove Road, we hit the jackpot.

So many photos so little time.  We passed three or four ramshackle piers on our drive and my heart skipped a beat, I was quite excited, except it wasn’t the right time of day or the right weather.  I promised myself to come back at sunset to take some photos.  I did go back but the weather wasn’t so co-operative, I did get a shot late afternoon but it is an area I would have loved to have more time with and maybe if the temperature was better I may have been more enthusiastic about doing a sunrise which I think would have been great.  But as I have said before, you get what you are given. 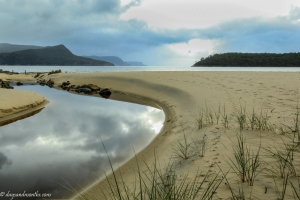 After this, around a few more bends, we discovered the  beautiful little sandy area of beach with a rivulet winding its way to the sea.  Someone had been for a walk along its shore leaving their footprints in the sand.  The water was fairly still and there was a great reflection in the water.   It was another gem, I just happened to look at the right time, stopped and got the shot just in time to see Cape Pillar in the very, very far end, then the mist rolled in and that was it.

Getting back into the car I thought well that was great, can’t be much more to see.  Boy was I wrong.  The best was yet to come, the mist was coming in and the rain was intermittent but not too heavy.   I saw a pier in the distance where the bay curved around so we went down another dirt road to investigate.  The pier turned out to be a modern one where the boats from Port Arthur head over to Point Puer.  We had never heard of this area before so were quite excited.  (See my previous post on Point Puer).  It was the greatest surprise on a misty day to discover it looking ethereal and mysterious.  I still feel like we were in a dream being there.  How lucky I like piers as this was what attracted me to this spot and we pushed on to discover such a wondrous area.  The water was such a beautiful aqua colour contrasted just perfectly against the beautiful trees and grasses that were strong in colour thanks to the rain.

Further down that same road as the windscreen wipers kept up a steady rhythm I saw the mist on the distant hills and the grass so green and wet, such a gorgeous rural shot.  Such diverse scenes on the one road. 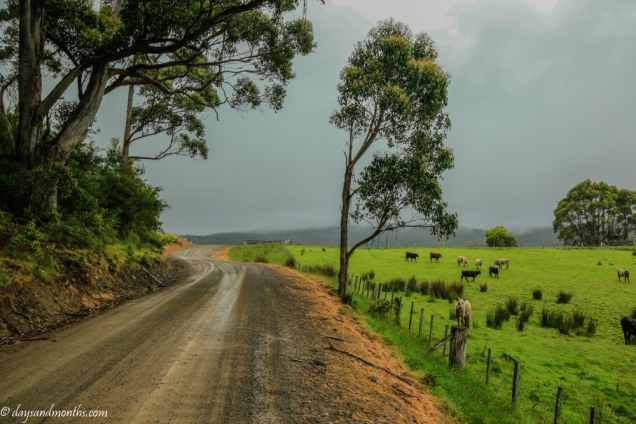 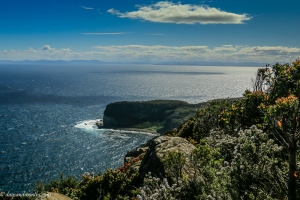 A few kilometres further down Nubeena Road and another turn to the left had us on Stormlea Road that led to two hiking trails.  We are not really ones for a lot of hiking, if there are great views or interest along the way then its worth it.  We would have liked to have done the Cape Raoul path but it was five hours return so opted for the Ship Stern Bluff walk instead which was 1.5 hours return.  It was a long walk with no views until you finally reached your destination – a view of Ship Stern Bluff so named because of its shape.  Of course I think you can go right down to the bottom but then you have to come back up again right?  Some time later a person then told us if we had of taken the Cape Raoul path, not much further along past the junction we would have had ocean views, that would have been great. 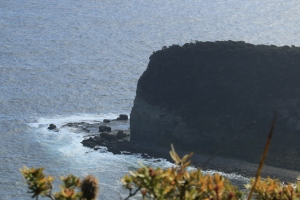 Ship Stern Bluff is actually a popular surfing area, we wouldn’t have picked that on the day of our view.  There were no surfing waves in sight just the constant barrage of the surf against the stern.  It was a fairly rough day on the water.  Nevertheless a great view.  I think its name comes from the stern-like rock that juts out at the bottom. 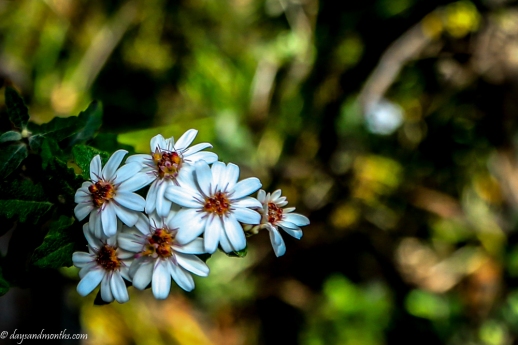 On our return from the walk and in need of a rest room we realised there was one on private property right where we parked the car. Luckily the people living there are very kind to hikers and have set up an eco-toilet. It was the oddest and most wonderful thing I have seen all at the same time. Wonderful because I was in desperate need but odd because of where it was in the middle of nowhere and the elaborate design.  I only had to negotiate the stile over the fence as my only hurdle…… 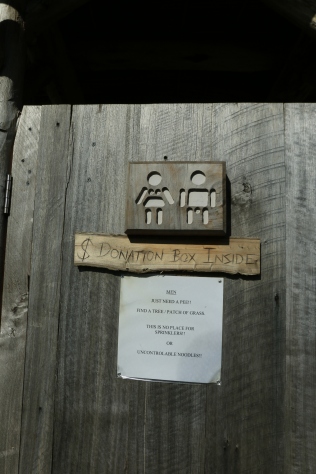 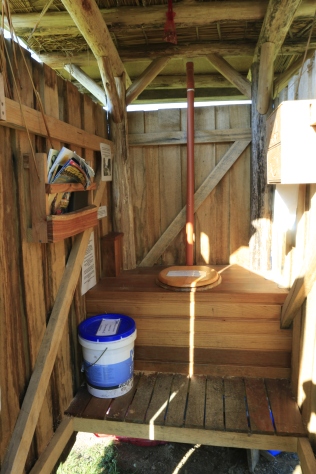